Get to Know Parts A and B: Original Medicare

Original Medicare refers to coverage managed by the federal government. When you choose Original Medicare, you get the coverage included in Medicare Part A and B, which help cover hospital and medical care costs. 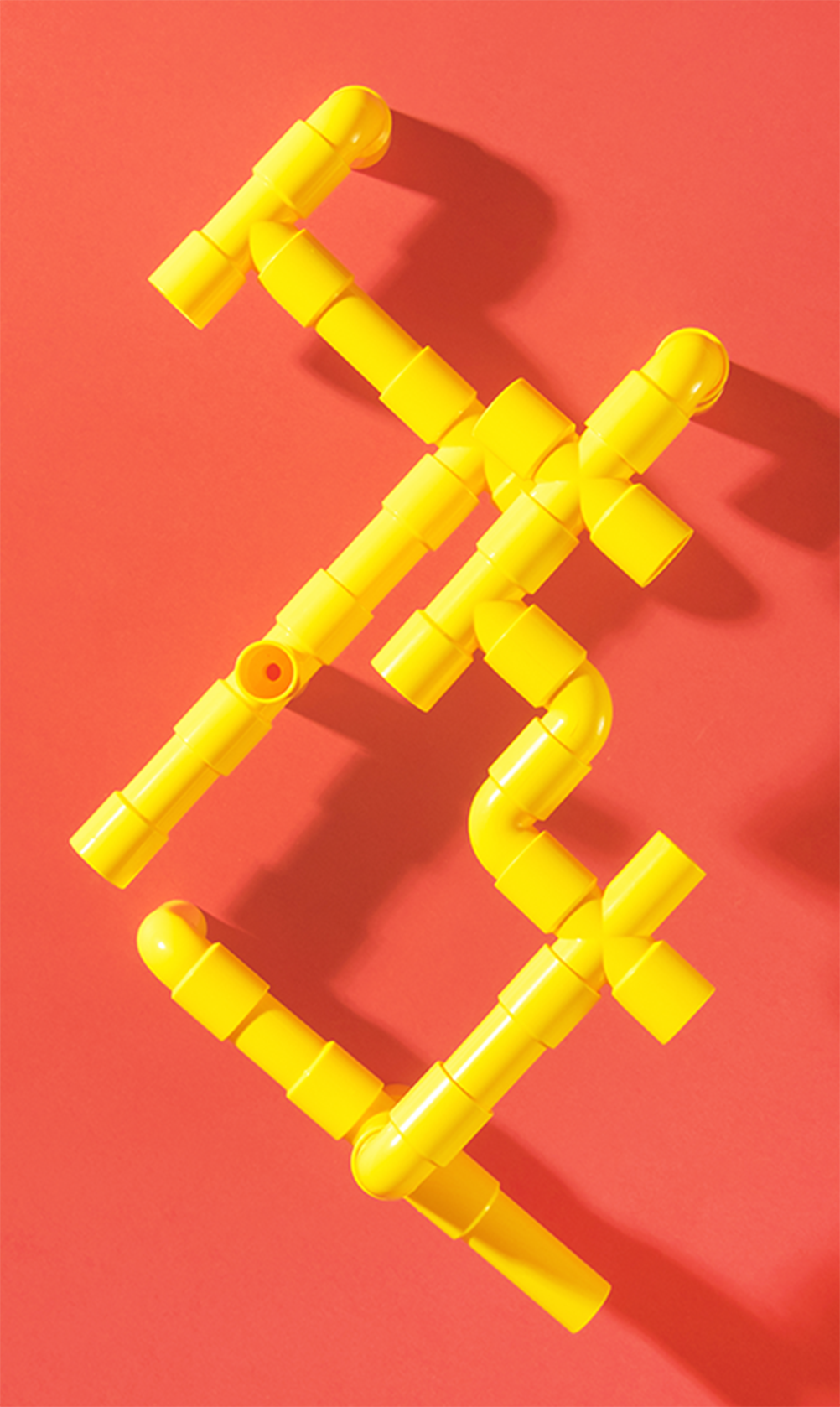 Medicare Part A covers certain hospital expenses. Part A has an annual deductible and coinsurance on some services. Most people do not pay a monthly premium.

Part A benefits include:

Medicare Part B helps you pay for your medical expenses. After you meet your Part B deductible, you will typically pay about 20% of the approved cost for covered services. Part B has a monthly premium.

Part B benefits include services that help diagnose, treat, or prevent a condition or illness. They also cover ambulance services, mental health services, getting a second opinion before surgery, and limited outpatient prescription drugs.

There are four parts to Medicare: A, B, C, and D. Original Medicare consists of the first TWO parts. Part A covers hospitalization and Part B covers "outpatient" care like doctor visits. You can read more about these in the next section below.

What's the difference between Original Medicare and Medicare Advantage?

First, remember Medicare Part A and B comprise Original Medicare. Part C is known as Medicare Advantage. They come from private insurance companies contracting with the federal government to provide all the rights and benefits of Part A and Part B — along with added benefits like dental, vision, hearing, and prescription drug coverage. And unlike Original Medicare, Medicare Advantage plans also have a maximum yearly out-of-pocket, after which the plan will pay 100% of your covered expenses.

What's the difference between Original Medicare and Medicare Supplement Plans?

What's the difference between Original Medicare and Prescription Drug Plans?

This brings us to the fourth part: Medicare Part D Plans, also known as Prescription Drug Plans. Various private companies can offer them, and they help pay for many of the prescription drug costs not covered by Medicare Part B. Medicare Part B covers only a limited number of outpatient drugs under limited conditions. If you have Original Medicare, you can purchase a stand-alone Part D plan to help cover your medications.

Request a free guide to learn more about each type of plan and all the extras you can get with a Medicare plan from Blue Cross Blue Shield of Michigan.

GET YOUR FREE GUIDE

AM I ELIGIBLE TO ENROLL IN ORIGINAL MEDICARE?

All U.S. citizens and legal residents age 65 and up are eligible for Original Medicare, as well as people under 65 with a qualifying disability, End Stage Renal Disease (ESRD), or Lou Gehrig’s disease (ALS).

Your Initial Enrollment Period (IEP) is the first opportunity to sign up for Medicare and lasts for 7 months: it begins 3 months before your 65th birthday and ends 3 months after your 65th birthday. For example, if your birthday is in May, your IEP begins in February (3 months before) and ends in August (3 months after). During your IEP, you can sign up for Medicare Parts A and B and add on prescription drug coverage (Part D), a Medicare Advantage (Part C) plan, or a Medicare supplement plan.

What if I miss my Initial Enrollment Period?

You may also qualify to enroll during a Special Enrollment Period (SEP). There are many scenarios that warrant an SEP, but the most common is that you were still working and had creditable coverage through your employer, or had coverage through your spouse’s employer, when you first turned 65. You can sign up for Parts A and B as well as add on additional coverage during your SEP.

Is there a penalty for enrolling late in Original Medicare?

There may be penalties but there are also exceptions which we will cover here. Let's take it part-by-part.

Most people will not face a penalty for late enrollment in Medicare Part A because they have sufficient work history (10 years) to qualify for free Part A.

Part B carries a premium for everyone, regardless of how long you or your spouse worked and paid Medicare taxes. Late enrollment also carries a significant penalty. Your Part B premium will be increased by 10% for each full year you were eligible but did not enroll.

For example, if you delayed enrollment for three years, your Part B premium would be increased by 30% (3X10%) for the rest of your life.

There is an important exception to the penalty for late enrollment in Part B: If you are still employed and/or covered by employer health coverage, there is no penalty. However, you will still need to enroll during a Special Enrollment Period when you no longer have that employer coverage.

Okay, stay with us here. There's a somewhat complicated formula for knowing what late enrollment will cost you with Part D. If you don't sign up for Part D within 3 months of signing up for Part A or Part B, here's what happens:

First, let's make some assumptions. Let's assume the average premium for Part D coverage is $30. Now let's assume you were six months late in signing up. Your penalty will be 1% of $30 (or 30 cents) times six, so $1.80 per month. You would pay that penalty for the rest of your life. If the Part D premium is not a nice round number like $30, then the penalty will be rounded up to the nearest dime.

The exception to this Part D penalty? You may not have to pay a penalty if you had health insurance through your job (or your spouse's) when you first became eligible for Part B.

Are there different eligibility requirements for different parts of Medicare?

Original Medicare covers some of the costs for hospital and medical care.

You can enroll in a separate Part D plan to cover prescription drugs or a Medicare Advantage (Part C) plan that covers both medical and drug costs, as well as other services like dental, vision, and hearing.

WILL ORIGINAL MEDICARE COVER THIS BENEFIT?

This chart provides a high-level overview of the coverage included in Original Medicare.

Covered services may be subject to deductibles, copays, or coinsurance. 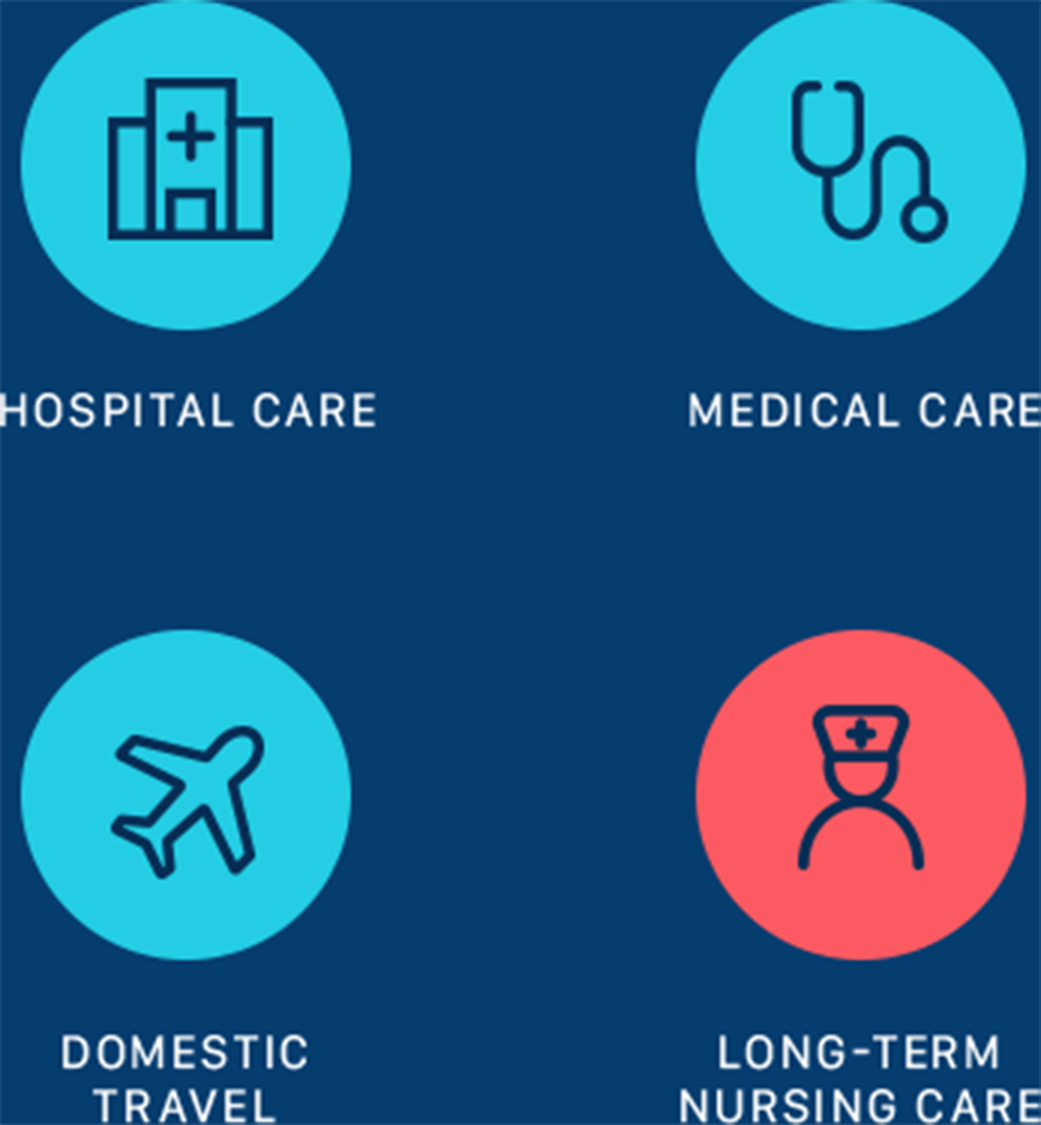 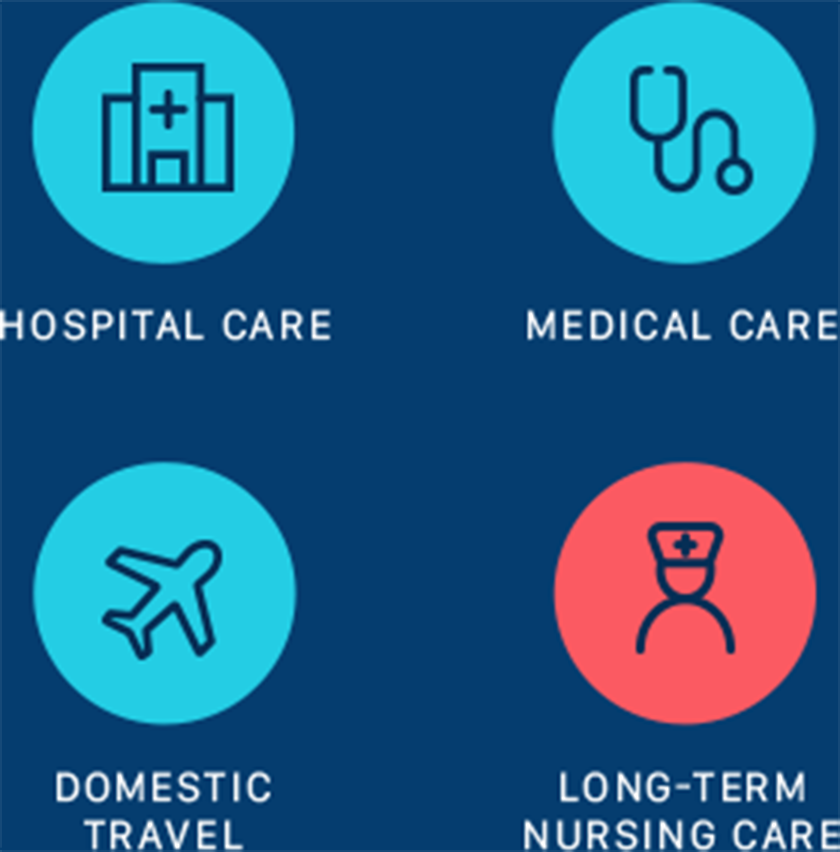 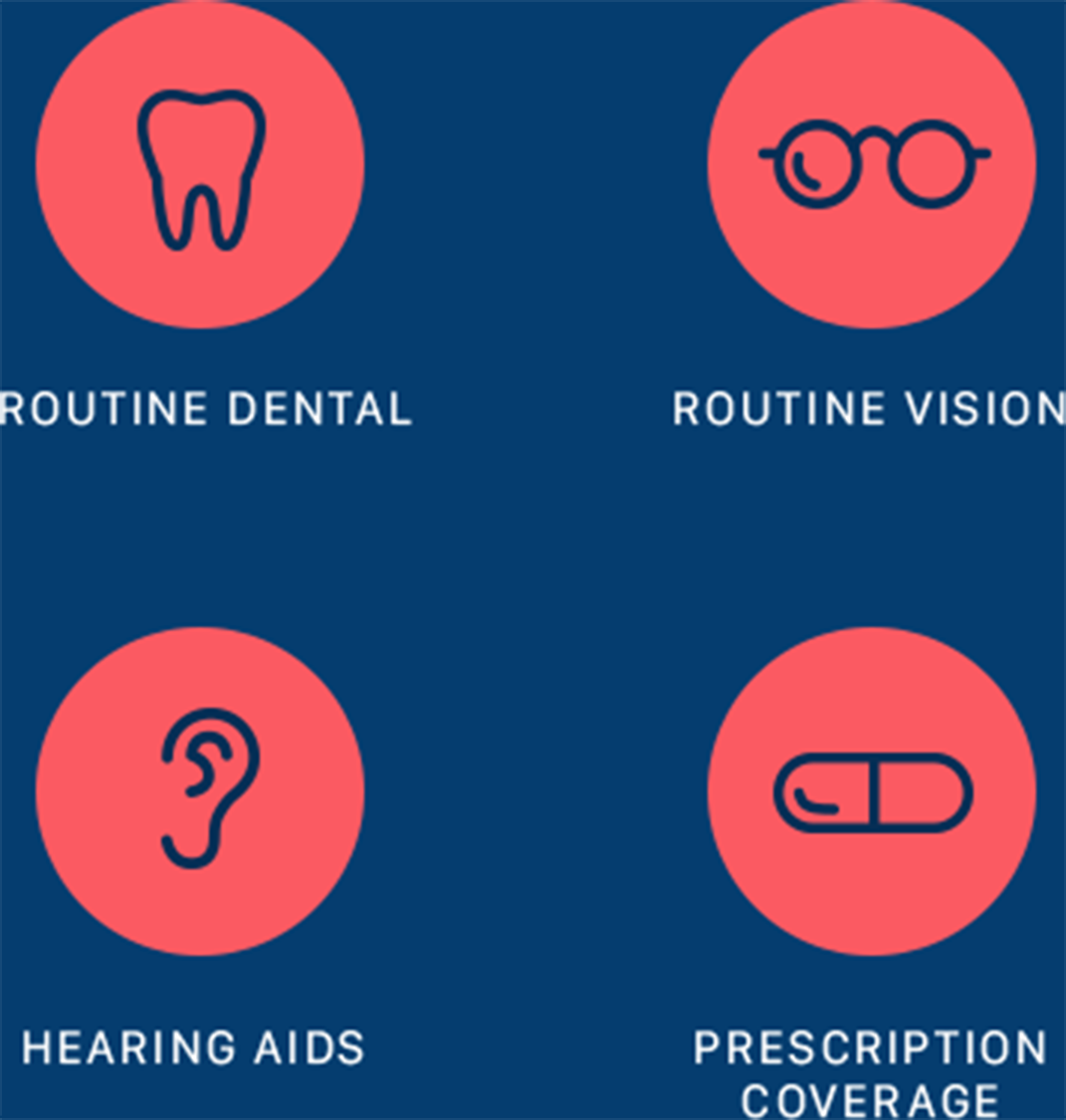 Note: Domestic travel means that you can visit any doctor who accepts Original Medicare in the U.S. Also, for purposes of this chart, long-term nursing care does not include skilled nursing care.

WILL ORIGINAL MEDICARE COVER THIS BENEFIT?

This chart provides a high-level overview of the coverage included in Original Medicare.

Covered services may be subject to deductibles, copays, or coinsurance.

Original Medicare (Parts A and B) does not include dental or vision care, and only limited outpatient drugs are covered.

Will my doctor be covered?

If you choose a Medicare plan from Blue Cross Blue Shield of Michigan, which has the largest network of providers in the state, there is a good chance your doctor will be covered.

With a Medicare Supplement plan, you can see any doctor that accepts Medicare. If your doctor does not accept Medicare, they can choose to treat patients on a case-by-case basis.

With a Medicare Advantage plan, your doctor must participate in the plan's network. Click here to see if your doctor is in the Blue Cross Blue Shield of Michigan or Blue Care Network.

How do I get coverage for something not covered by Medicare?

What if I'm still working and have employer-provided health insurance?

Then you should talk to your employer before you turn 65 to understand how Medicare will affect your insurance. Depending on the size of the company, some employers may require you to take full Medicare benefits when you turn 65. With others, you can wait until you retire to enroll in Medicare.

If your employer does not require you to take full Medicare benefits, you may still want to enroll in Medicare Part A because it is free and can serve as secondary insurance which may cover things your primary insurance does not.

IMPORTANT: Once you enroll in Medicare, you can no longer contribute to an Health Savings Account (HSA). So if you have a high deductible health insurance plan through your employer and an HSA that you still want to contribute to, then you should delay enrolling in Part A to avoid a tax penalty.

What is preventive care?

Preventive services help you identify and treat health problems early so you can stay healthy. These include exams, shots, lab tests, and screenings, among others. Medicare Part B covers some preventive care services, although you may have a 20% coinsurance on services after you have met your deductible. If you have a Medicare Advantage (Part C) plan, your private insurance provider will have a list of preventive services they cover.

HOW MUCH DOES ORIGINAL MEDICARE COST?

For many Medicare recipients who have worked most of their lives, Part A of Medicare has no monthly premium. If you do not meet the minimum working requirements, you may have to pay a premium. Part A has a deductible and may have a coinsurance for certain services.

When it comes to Part B, most people pay the standard monthly premium. However, if your income is above a certain amount, you may have to pay a higher premium. You can find this year’s monthly premium amount on medicare.gov. Part B typically has a 20% coinsurance on covered services after you meet the deductible.

Part A and Part B do not have an annual out-of-pocket maximum, which is a cap on how much you would pay for services each year.

Are Medicare costs based on income?

Your modified adjusted gross income may determine how much you pay for certain parts of Medicare. If you have a higher income, you may have to pay a higher monthly premium for Medicare Part B, which covers medical insurance.

What if I can’t afford Medicare?

Medicare is designed to provide healthcare to all eligible individuals. You can get help from your state paying your Medicare premiums. You can also sign up for a Medicare Savings Program, which can help with monthly premiums, deductibles, coinsurance, and copayments if you meet certain conditions. And depending on your income, you may be eligible for Medicaid as well, which offers low-income families and individuals free or low-cost health coverage.

How do I make payments for Medicare premiums?

If you are receiving benefit payments from Social Security, the Railroad Retirement Board, or the Office of Personnel Management, your Part B premium will be automatically deducted from your benefit payment. If you don’t get one of these benefit payments, you’ll receive a Medicare Part B bill in the mail with instructions about your payment options, which include paying by check, money order, credit, or debit. You can also set up automatic payments for your premiums through your bank or Medicare Easy Pay.

IS ORIGINAL MEDICARE RIGHT FOR ME?

Remember that Original Medicare only covers hospital and medical benefits, so you’ll likely need to add more coverage if you want help paying for prescription drugs, dental, vision, hearing, or other specialized care. If need more coverage than what Original Medicare provides, you can purchase a Medicare Advantage (Part C) plan that may also include drug coverage, a stand-alone Part D plan, or a Medicare supplement plan.

Understand who is eligible for Medicare and how you can sign up.

Medicare supplement plans help pay for some or all of the costs that Original Medicare doesn’t cover.

A prescription drug plan helps cover the cost of medications.

Have fun and we’ll see you back here soon.